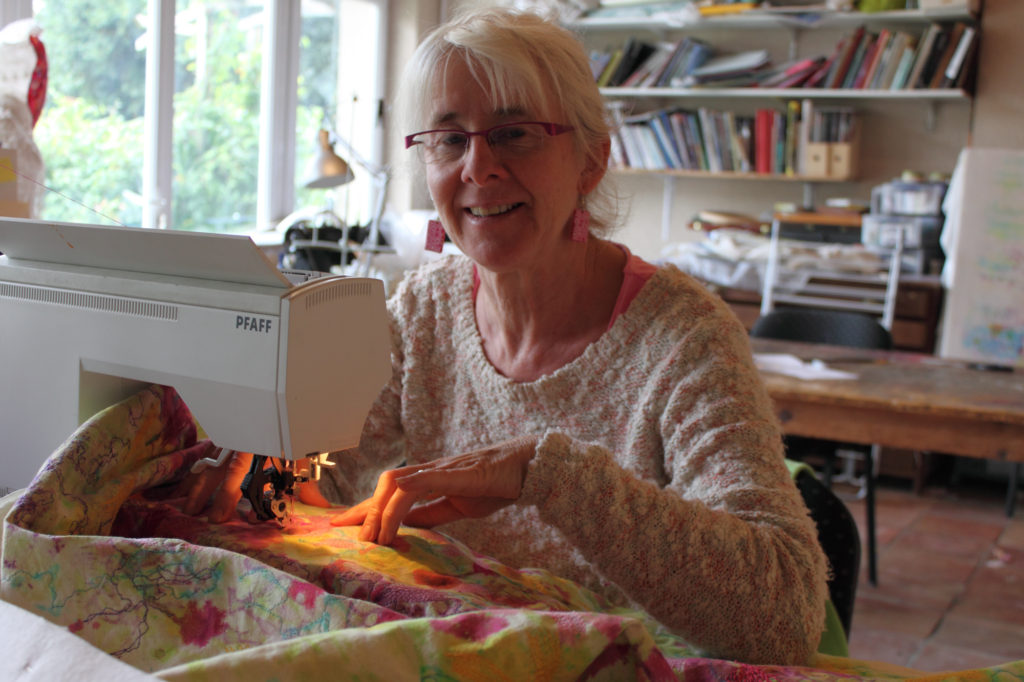 Val Holmes did her foundation course at Gloscat at the end of the 70’s, followed by a BA(hons) in Embroidery at Manchester School of Art (1979-1982) at what is now Manchester Metropolitan University.  Followed on by a year in the fine art department of Coventry Polytechnic.

She then created a career as an artist with exhibitions in galleries and with various groups, as well as teaching part time in an Art School and in Embroiderer’s Guilds and private adult education events.

With more and more people asking for her courses in her own home, but without her own accommodation Val decided to move to France in 1991 to open a studio setup with accommodation on site. La Boulinerie was the first creation in 1991 in an old farmhouse and buildings in the Vendee; With a comfortable space, large studio and an easy going atmosphere so that students could really concentrate on their design and embroidery projects.

Val’s studies and continued enthusiasm to discover means that she has a lots of design skills and well as textile techniques to share with students. She is used to helping each student in just the right way to bring out the best in them, putting novices at their ease, and helping the more experienced to discover their own pathway.

In 2005 Val and Claude moved to Luçon, to la Villa des Roses. Thus there were two studios, one for textiles and one for printing, and 8 ensuite bedrooms for students. Their work was now on permanent display and could be viewed by rendezvous.

Val’s work continued to develop using a huge variety of techniques and points of view. Installations are sometimes created, but most work is wall based and framed or mounted on a canvas stretcher.  She explains that there are two sides to her work suggesting that they are “carnets de voyages” one is “exterieur” what she see around her and her reaction to it. One is “interieur” , a more intimate work about “life the universe and everything” but most especially through the eyes of a woman. Most recently in the Legacy Impressions exhibition these two worlds have met. This exhibition was shown at Pour L’amour du fil in April 2019 and  toured with the Knitting and Stitching show in Autumn 2019 to London, Dublin and Harrogate.

2020 has seen yet another move. This time to open a permanent gallery in La Flotte on the Ile de Ré shared with her husband Claude Vallin. They both have studio spaces in their new home and a good sized gallery near the old market in La Flotte. The gallery Fils et Encres (Thread and Ink) opened on July 11th 2020. Courses will continue in Val’s new studio with accommodation in their new home and numbers restricted to four to six people.

One Response to Val Holmes